Equity markets continued to rally in the second week of January as investors considered the idea of a Fed-orchestrated soft landing. An inline December CPI showed consumer prices falling on the headline number and core reading. The moderation of prices increased the probability that the Fed would end rate hikes in May at a terminal rate of 4.75% to 5%. Another catalyst was a positive call from Goldman Sachs that suggested that Europe would avoid recession. Their call, coupled with a continued reopening of China, helped advance international markets. Fourth quarter earnings started in earnest, with many banks reporting numbers on Friday. The results were generally solid; however, most banks increased their loan loss provisions in anticipation of a slowing economy.

The S&P 500 regained its 50-day moving average and 200-day moving average, closing just below 4000, a level not seen since mid-December 2022. The S&P 500 advanced 2.7%, the Dow rose 2%, the NASDAQ added 4.8%, and the Russell 2000 increased by 5.3%. The Information Technology sector, along with the Consumer Discretionary sector, led while Consumer Staples and Healthcare sectors lagged. 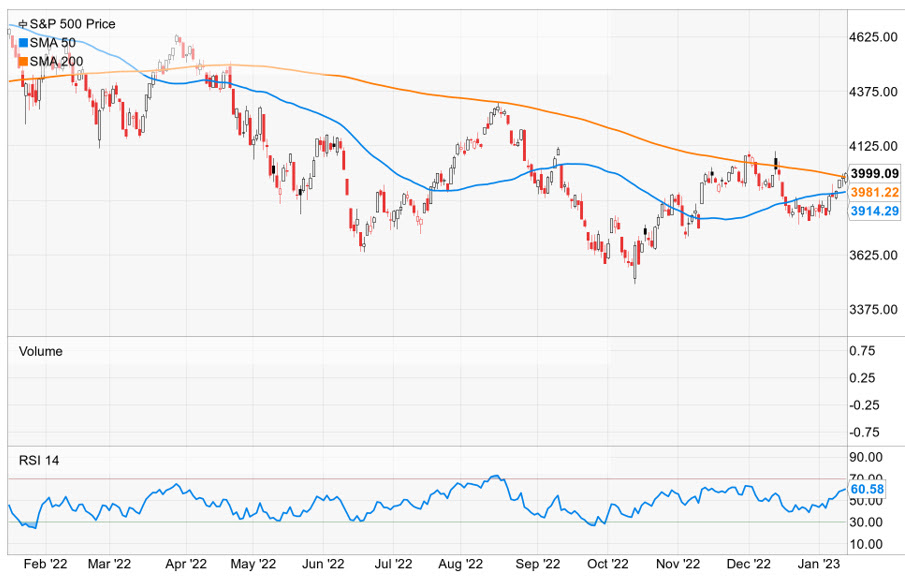 US Treasuries advanced for a second week in volatile trade. The 2-year yield fell five basis points to 4.22%, while the 10-year yield decreased by ten basis points to 3.61%. Of note, Treasury Secretary Jane Yellen warned of the dire consequences if Congress cannot agree on increasing the debt ceiling, which is expected to be reached next week. Given the current state of Congress, the debate will be much more contentious and perhaps push the deadline for a resolution leading to increased market volatility, specifically within the rates markets. 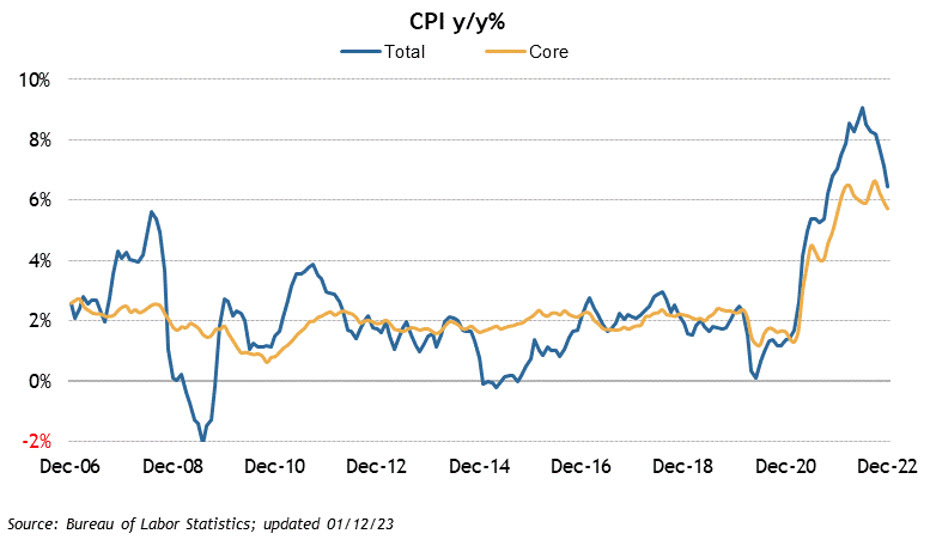 The December Consumer price index highlighted economic news. The headline number fell by 0.1% versus the estimate of 0%, while the Core number, which excludes food and energy, increased by 0.3%, in line with expectations. On a year-over-year basis, the headline number fell to 6.5% from November’s 7.1%, while the Core number fell to 5.7% from 6%. The labor market continued to show resilience, with Initial Jobless claims coming in at 205k versus the estimated 210K. Continuing claims fell to 1.634m from 1.697m. The preliminary University of Michigan Consumer Sentiment for January showed an uptick to 64.6 from the final reading in December of 59.7. The better sentiment centered on easing inflation and better personal finances/earnings.

Investment advisory services offered through Foundations Investment Advisors, LLC (“FIA”), an SEC registered investment adviser. FIA’s Darren Leavitt authors this commentary which may include information and statistical data obtained from and/or prepared by third party sources that FIA deems reliable but in no way does FIA guarantee the accuracy or completeness.  All such third party information and statistical data contained herein is subject to change without notice.  Nothing herein constitutes legal, tax or investment advice or any recommendation that any security, portfolio of securities, or investment strategy is suitable for any specific person.  Personal investment advice can only be rendered after the engagement of FIA for services, execution of required documentation, including receipt of required disclosures.  All investments involve risk and past performance is no guarantee of future results. For registration information on FIA, please go to https://adviserinfo.sec.gov/ and search by our firm name or by our CRD #175083. Advisory services are only offered to clients or prospective clients where FIA and its representatives are properly licensed or exempted.